A 17-year-old runner was critically injured Saturday night while taking part in a fundraising event for the Bakersfield Police Department's K-9 unit.

The teen was hit by a Honda Accord on Calloway Drive, near the intersection with Stockdale Highway, around 9:15 p.m. His name was not released. Police said Sunday he suffered major injuries and was in critical condition at Kern Medical Center.

The driver of the car, 19-year-old Casey Geiger, may have been under the influence of marijuana, police say. Geiger took a blood test and was released pending results.

The nighttime run followed the Kern River bike path after leaving the Park at River Walk at 8:30 p.m. It was the 8th annual Howlin' at the Moon Fun Run.

Police, in their press release, say they don't know why the runner "diverted from the planned route" and ended up on Calloway in the path of an oncoming car.

But Californian sports writer Zach Ewing, who took part in the 10k race and watched the teen head up the wrong fork, said the path was pitch black and confusing at that spot.

"I was totally unsure for about half a second," Ewing said of the unmarked split.

By that time twilight had faded to dark and the only course markings Ewing had seen were glow sticks that occasionally popped up along the way.

The 17-year-old was two spots in front of Ewing when the unmarked fork loomed.

A man between them shouted: "Hey bro, you need to go right," Ewing said.

But the teen apparently didn't hear the advice.

Ewing veered right because the runner in front of him seemed sure of the route. The teen disappeared up the left fork. Just around the turn, Ewing saw a light and knew he was on the correct path.

After reaching the finish line, Ewing heard that a runner had been hit on the course.

Online court records show Geiger, the driver, pled no contest to charges from a November 2008 misdemeanor battery arrest; a sentencing hearing is set for December. An October arrest on suspicion of misdemeanor possession and use of a controlled substance was scheduled for a hearing last week and results were not immediately available Sunday.

Police are asking anyone with information to call the traffic investigations unit at 326-3967.

Posted by Andy Noise Experience! at 7:02 PM No comments:

Email ThisBlogThis!Share to TwitterShare to FacebookShare to Pinterest
Labels: howlin at the moon

Retired but not Ready for the Rocking Chair 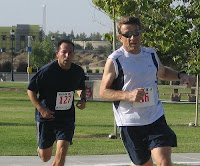 Bruce retired from the city this past year and has continued his winning ways. If you ever want to join him in training, he is a member of the Donut Shop Crew. The run at 5am and I doubt they ever have the donuts.

A little ways down the list is "Even As We Speak" Peter Wonderly who ran 53:03. Peter is the MC at many events like Toad's, the Halfs, Fog Run and many more events.

Posted by Andy Noise Experience! at 6:13 PM No comments:

Don't Call It a Comeback

After a cross country trip with his family, where they seemed to be flying around the country, Wykoff got himself a third place finish. Since his knee surgery over a year ago, Jonathan has been hoping to get back to where he was. His 43:05 is a good start.

Shane Duncan ran a very quick 35:58 and I do not recall seeing his name in results before.

Posted by Andy Noise Experience! at 4:12 PM No comments:

Bakersfield Gets First in the Female 55 to 59

Lupe Eberly destroyed the field and won by almost seven minutes. Bakersfield had 4 in the top seven and there were over thirty ladies in this age group.

Posted by Andy Noise Experience! at 3:23 PM No comments:

Bakersfield gets a third in the Female 30 to 34

I do not know Jayme but she got 3rd place out of 37 ladies in this age group. Almost a third of this age group were from Bakersfield but the only one I know is a facebook friend Gabrielle Alexander who ran 1:27:26.

Posted by Andy Noise Experience! at 2:52 PM No comments: