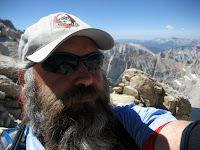 In 2009, I got 2/3rds of the way up the 99 switchbacks and swore I would not try to hike Mount Whitney in one day ever again. I wrote the following blog right after that experience. At the time I felt it was the hardest thing I had ever done but 2010 was Hors Catégorie which means "beyond categorization".

In 2009, I went about 8 miles up and reached over 13,000 feet. This year I hiked the entire 99 switchbacks and reached Trail Crest and entered the Sequoia National Park. (13,777 feet). The view was amazing and worth the effort to get there. But then things got serious then.

How I got to Trail Crest started almost a year ago after I got over my first attempt and decided if I trained harder I might be able to summit in one day. Since that day, almost every workout I did had Whitney as it's focus. I tried to walk every where no matter the conditions or how tired I was. I would tell myself that Whitney would be harder and just kept going.

Knowing I was very weak in other areas, I started attending Joe Petersen's Building Better Bodies Boot Camp as often as I could. I know it helped me with my agility and strengthen my core which would help on the downhill sections. Last year before Whitney, I started the Bakersfield Distance Project with Joe and this helped me put in even more miles and got me back into doing marathons.

Often I would walk to our long runs at the Bluffs, do the workout and then walk home. I would leave my house before 6am and not get back till 1pm. Then walk that evening too. I logged at least 70 miles a week and did over 100 miles in a week three times. I walked in all kinds of weather and often when I was exhausted. I remember doing a 22 miler with the BDP and then eating lunch and then taking Blanca for a 4 mile walk.

Just this year I did the 26.6 mile BUMR, the LA Marathon, San Diego Marathon and the San Francisco Marathon. Plus I walked 50 miles at the Relay for Life. So I had the endurance but I knew the steep rocky trails would get me in the end. Because of my size the steep stuff slows me down a lot.

I am like one of those semi-trucks going up the Grapevine. I can haul on the flat or moderately hilly stuff but steep is just a matter of physics. The old F=MA rules the day. Force equals Mass times Acceleration or in this case, Acceleration equals Force divided by Mass. Which means you need a lot of Force to overcome the Mass to get any Acceleration. This is why a sports car can fly up the Grapevine and the Mack truck goes so slow.

This slowness also comes into play going downhill too. Just like the Grapevine, the big trucks are forced to hit the brakes hard so they don't runaway. Again F=MA rules the day and it takes a lot of energy to safely go down the treacherous rocky trails of Whitney. Size also makes it hard to move quickly and makes the descent even more dangerous. You can not go jumping from uneven step to uneven rock as nimbly as one's lighter counterparts.

So I put in the training but had little hiking training mainly do to my schedule and not liking to travel. To make up for the lack of trails, I tried to hit the trails at the Panorama Bluffs a couple times a week. Though the trails at Whitney are much rockier, steeper and longer, at least I got some kind of trail work in.

Also a month ago Diana and I wogged a 24 miler on Sunday and then did the 16 mile Half Dome hike on Monday. This was a tough double and some of the Half Dome ascents and descents are similar to Whitney. So when Jeri contacted me last Monday that she had an extra permit, I was ready to go. Or so I thought.

On Tuesday, I decided to shoot the BTC Summer Series 5.0 and then walk home. I had planned this before I got a permit but still decided to do it to test out my headlamp and get one hard workout before Whitney. That morning, I coached run camp and then did my Yokuts & Bagels walk for about 12 miles. That night I ended up doing 13 plus miles in the dark and it felt pretty easy. So I knew I was fit and I decided to take it easy the rest of the week.

My 2010 Whitney experience started when I woke up at 6am Saturday for run camp at the Bluffs. On schedule was a Double Hilla Killa which usually I would do after I walked there and I would have walked home after it. But on Saturday, I only did one Killa Hilla because i was heading to Whitney that afternoon. The workout went great and everyone really killed the course. Blanca even did the whole thing with me (her first).

Then, I took her and Nicholas (he did the one Killa Hilla) to Zorbas for breakfast. Now it was about noon and I was antsy to get going so I packed off and headed to Whitney Portal around 1pm to meet Jeri and pick up my permit. I should have done what I planned to do and took a nap till 3 or 4pm and then drove to Whitney but I was not tired and just wanted to get going.

The drive to Whitney is a dull one but I do like driving by Red Rock Canyon and at least there was light traffic and I made good time. It is amazing how the only stations that come in loud and clear out there are either religious or spanish.

Around 4pm, I made it to Lone Pine and the place was busy. Every hotel was full and the streets were bustling. i stopped for a quick bite to eat and then I headed up to Whitney Portal to find Jeri who had our hiking permits. As luck would have it i found her rather easily and we spent some time talking about what our plans were for Mount Whitney.

She was planning on leaving around 3am and hoped to complete the first couple miles in the dark and get to the first difficult section at dawn. This is what my group did last year and it is a good plan of attack because the first miles are pretty easy to do with a headlamp and you have company along the way. Leaving this early should give you time to summit and get back down before it gets dark again. Which we did last year except we turned around at the 8 mile point of the 11 mile hike and got to the cars before dark.

Knowing that I go slow up the steep stuff, I had a plan of leaving at midnight so I would not have to descend in the dark if I made the summit. Going uphill in dark is not so bad even if the footing is bad. So I figured I could go slow and bank some distance up the hill. This meant walking in the dark for 5 hours by myself but I figured it was doable.

In the past, I have proven to myself that I can stay up for a couple days and still function pretty well. The year before I was up for 40 hours straight when I did Whitney and this year I walked the entire 24 hour Relay for Life and felt find with no sleep (I covered 50 miles). Plus I figured I could take a quick nap at trail camp if needed.

So midnight was the plan but before I left home, I read a posting about starting the climb even earlier. One can hike the first 2.7 miles to the Lone Pine Lake trail crossing without a permit and so one could start earlier.

You just needed a permit to enter the Whitney zone and the day permit is valid at midnight. So you could hike to this point and wait for midnight. I figured it would take me two hours to get to that point and decided to leave at 10pm.

While this strategy would give me the best shot at making the summit, it could also get me in trouble. Sure I would get up higher before I needed to turn around to avoid the afternoon storms but it meant my day would be even longer than normal. More time on my feet, more time at altitude and more time out on the mountain. This meant more time for something to go wrong.

In retrospect, one should probably leave at 3am at the earliest and just go as high as you can. If it means not getting to top in a day, that just means you need to make it a backpacking trip. But since I do not like camping and with my size adding at backpack into the mix means hauling over 300 pounds up the hill which is impossible with the terrain up there.

But I had sealed my fate and decided to go at 10pm (I told everyone beforehand I was going at midnight.) So I went back to Lone Pine, ate some dinner and waited to start my ascent. At 10pm, I left my car (never did fall asleep) and started walking towards the trailhead. As I neared I noticed a truck stop in the middle of the road and four of five headlamps too. Then they all shouted at me "There is a bear to your right!".

Not what you want to hear before you have not even started. Of course my feelings on bears are the same as sharks. If you want to surf it is their home, if you want to hike it is their home. I try not to do anything to dumb and hope for the best. If either wants to attack me they can and there is not much I can do to stop them except not entire their homes. If they do attack I will fight but when I am in their homes I just do not worry about them.

So I just looked over and did not see anybody and walked past the other headlamps and started my hike. The weather was perfect and the first miles of the travel are fairly easy. I crossed a small creek and then the larger one with the logs. Occasionally, a group passed me going downhill but no one was going up. Most asked me how far they had to go and most looked beat. I should have looked at their faces and turned around with them and went home but I just kept going.

Before I got to the Whitney zone, I heard something moving in the woods above me. Now that I was pass the streams it was super quiet so I could hear everything. At first I did not want to see what was there but as I rounded a switchback I flashed my headlamp into the darkness and to my great pleasure, all I saw was a doe. Finally I crossed the last stream and made it to the Whitney zone at midnight which was when my permit was valid.

Now I had to begin the first difficult section which unlike the first section is much steeper and rockier. In the dark, this section was slow going and this would become an issue as the night progressed. Spending so much time up high will eventually bite you.

After a mile, I reached Outpost Camp and could see a few tents and wished I was in one trying to sleep instead of wandering around in the dark by myself.