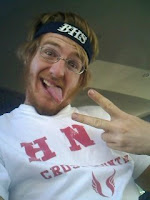 In only his third year of cross country running, former Driller Zachary Holt cane in 6th overall to help his team qualify for the NAIA National Championships. Holt was planning on attending Bakersfield College this fall but his plans changed.

After he finished his senior track season for BHS, he decided to train for a marathon with the Bakersfield Distance Project and began the difficult task of working as a lifeguard and training for a marathon in Bakersfield's awful summer time heat and air quality.

The marathon he picked for his first race was the San Francisco marathon in late July. I expected him to break three hours if he ran smart but as I sat at my computer that morning following the race, I could not believe the performance he was having. In the end he ran 2:45 and came in 15th overall.

Besides myself, others took notice of his great race. One in particular was the cross country coach from Holy Names who ended up signing Holt to run for his team. Zach is the first local cross country runner to qualify for a national college cross country championship in recent memory.

Redding, CA - The Hawks traveled to Simpson University, the site of this years' cross country championships. Going in to the race the Hawks were confident enough to compete, and compete they did, winning their sixth California Pacific Conference Championship.

For the Hawks it was senior Juan Gomez who won the race with a time of 27:34 at a pace of 5 minutes 22 seconds per mile. The senior has had a standout season and will lead his team to Nationals for only the third time in program history.
The Hawks placed five runners in the top 10. Those Hawks were, sophomore Adrian Luna placed 3rd with a time of 28:28 (5:44 pace), freshman Zachary Holt placed 6th with a time 29:17 (5:54 pace), and junior Juan Monje placed 7th and ran with a time of 29:37 (5:58 pace).
Nationals will be held in Vancouver, Washington on the Fort Vancouver Historical Site. Nationals begin on November 21, 2009. For more information please visit the following link for more information.
http://naia.cstv.com/genrel/2009MWXCChampionships.html
Posted by Andy Noise Experience! at 3:41 PM 1 comment: