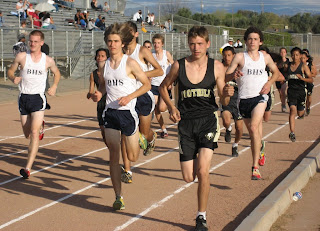 Foothill, Bakersfield, CA - Wednesday, March 11, 2009Last year, this meet was an opportunity to see one of the best throwers in the country and a state cross country champ at a dual meet. Ragans ended up with two state titles in the shot and discus in 2008 and has graduated. At this dual last year Ragans even ran in the weightmen's 400 relay and he was pretty quick too.

But Chris Schwartz is back for his senior season. Last year year he won the state D1 crown in cross country and came in second to German Fernandez in the 3200 and broke nine minutes at the state meet. This past fall, he made up for a poor performance at state by winning the Foot Locker Western Regionals cross country meet at Mt. Sac. Then he came in 8th at the Foot Locker Nationals! So get out to Foothill and see one of the best distance runners in Kern County history compete. Last year he won the 800, 1600, 3200 and ran on the 4 x 400 too!

Chris does have some help in the distance races, namely Erick Bautista who won the frosh/soph SEYL title in the 3200 last year. He caught my son in the last 100 yards for the win. So last year in the 3200 it was Foothill then Bakersfield it both the varsity and frosh/soph races.

Since Chris can score 30 points on his own, he can make this meet competetitive. Plus last year, Foothill won the boys frosh/soph league meet and they have pole vault facilities which gives them another ten points.

So the Drillers start out in a hole but they have a lot of depth and in a dual that counts for a lot. In the jumps, the Drillers are loaded with talent starting with Isiah Griggs (Jr) who made state last year in the high jump (6'6) and also can long and triple jump with the best of them. Not far behind Isiah in all three jumping events are sophomores Gabe Cardeans and Jimmy Green. Seniors Josh Harbin and Charlie Martinez are both 20/40 men in the horizontal jumps and who knows what other talent Coach Haver has out there.

In the sprints, Jerek Johnson (Sr), Charlie Anderson (Sr), Michael Norwood (Jr) and Walter Hunt (So) return after a successful 2008 season. Jerek and Walter compete at the state meet last year in both relays. Plus many of the aforementioned jumpers can sprint too.

In the throws the Drillers have Darien Moore (Sr) and Kenny Wallace (Sr) returning and they both scored at the SEYL league last year. With the graduation of Colin Ellis (Bakersfield) and Ragans, they should move up in the league standings.

New additions to the middle distances are Robby Harris (Sr) and Alex Clayton (Sr) who have the potential to go sub two in the 800, run a good 1600 and maybe even be on the 1600 relay. Robbie is a very good tennis player and will do both sports for the first time this spring. Alex is from Mississippi were he was a state qualifier in the 800.

Chris Schwartz is not the only national caliber athlete at the meet either. Bakersfield's Brushay Wandick is the top sprinter in town and one of the top ten seniors in the country. Colleges from around the country having been filling up coach Anderson's mailbox hoping to recruit her. Last year she was the only girl from Bakersfield High to make state. She competed in the 200 and we hope this year that her 4 x 100 team will join her at state. Also hope she helps the 4 x 400 team get their too.

In the sprints, she has some outstanding teammates like Lei Belt (So), Asha Brown (Sr), Vanessa Hairston (Jr) and many others. A Driller sweep in the 100, 200, 400 and the relays is a distinct possibilty.

In the distance events, there should be some good showdowns because Bakersfield's Sarah Baker (So) is the returning SEYL champ in cross country and the 800 and 1600. Foothill's Natalie Fernendez has been on her shoulder in both cross country titles that Sarah has won. She would have been right with Sarah in track but she ran in the frosh/soph meet at league. Foothill always has depth in the distance events and this year the Drillers have found some girls to help Sarah out.

In the jumps, the Drillers have the returning SEYL champ in the long and triple jumper. Marlese Williams will lead a young group of jumpers this year. In the high jump, Keirra White and Lei Belt return for the Drillers.

Lastly, the Drillers have a freshman thrower that should make an immediate impact along with their veteran throwers.
Posted by Andy Noise Experience! at 8:10 AM No comments: