In Pursuit of Four

Jordan went out at in a 74 and then cruised the race for a comfortable win that was over twenty seconds faster than 2nd place. Her 10:30 was her slowest valley 3200 in the past three seasons. For many laps there was a pack of five running behind her.

She went through the 1600 in 5:11 with the pack about 12 seconds behind. The pack was lead by the Buchanan girls. By the end of the fifth lap the chase pack was down to four due to the pressure put on Janzen. At the end of lap six, Marvin had taken the lead with the two Buchanan girls trailing her and this group stayed together till the last lap where the Buchanan girls gapped Marvin by seven seconds and had to weave through lapped runners to the finish line.

The first Kern athlete was another CSUB athlete, Whittenberg of Shafter. She was follwed by Barton of Liberty who beat both the Guzman and Lynch for the first time I believe.

At Least Five Just to Survive

I figured it would take sub five to win but it almost took sub five to make state. The lead pack went through the first lap in 72 with Bullard's runner leading. A pack of six went by the 800 in 2:29. The 3rd lap the group stayed together but slowed. Then Saylah took the lead with Macy, Chloe and Chelsea chasing with three hundred to go. Down the homestretch, Bricks over took Barsarian for the win. The top Kern athlete was CSUB bound Lopez of North.
Women 1600 Meter Run
Posted by Andy Noise Experience! at 10:18 PM No comments:

The 800 is the the perfect mix of speed and endurance. How it is run is often not so perfect. Most of the year, it has a waterfall start with numerous competitors but then the championships come and the field is stagger at the start.

For some meets they double up the lanes but in most it is a field of nine who stay in lanes till the beginning of the backstretch. This is how valley and state are run and where things do not go so smoothly.

At valley, they seed the heats by time at the area meets. Which is not very fair. If an athlete is in a slow area, she may have to run against the clock and hope she gets a top nine time or she is doomed to the slow heat. So she is once again going to have to race against the clock and hope to beat the third place finisher in the fast heat. This is almost an insurmountable task.

To be fair, the top girl from each area (there are four) should get a spot in the fast heat and the other 5 lanes should go to the next the next five fastest. But I doubt it will ever changed, so ladies remember to run like the wind and not the win at area.

One who does both is the valley champ Jordan Hasay. At beginning of the backstetch, where they break in for the curb, Jordan was gone and ran an excellent time. In fact, the top three times were real quick.

If Jordan drops the 800 for state, the heat issue does come into play because Bakersfield' Sarah Baker won the slow heat rather easily and ended up 6th overall. She is known as a fierce competitor and if given the chance to be in the fast heat she might of taken fourth and moved on if Jordon dropped the event for state.

Bang and Nobody is Out 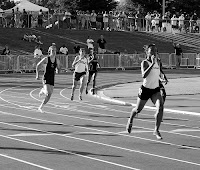 For most of the sprinting events, I hangout on at the top of the homestretch to get what I think is a good shot so I do not see the starts. But even from far away, I could tell someone false started but no one got DQed. Later, I heard quite a bit of grumbling about this matter.

Interestingly, at the West Coast Relays this year, the top seed in the girls 400 did false start. But later in the 1600 relay she ran one of the most amazing relay legs that I have seen and beat Edison to boot.

Erica Wilcox (Liberty Jr) was the top Kern finisher with a PR too.

Wandick has had a great high school career but has often been in the shadow of great high school athletes. In the past, she has had to contend with Dominique Lauderdale (Ridgeview 07 & Washington 11) and Romesha Anderson (Stockdale 07 & southern Miss 11) and this year it is super sophomore Prandini who scored 40 points for her team and lead the to a valley title. The Drillers had three in the top ten and Belt is just a 10th grader.

No Kern squad is going to state in this event this year. The Drillers have gone the past couple seasons and Ridgeview looked good to go earlier this season

She Will Have Company

Last year, Brushay Wandick went alone to state with the Driller boys and competed in the 200. This year the CSUB bound senior will have some company because she helped both of her relays squads make the state meet. She will be in four events: the 100, 200, 400 relay and 1600 relay. Of course she has been doing all four all year but at state there are prelims in all of them on Friday and then the finals are on Saturday.

Who Made State? (Boys)

To make state one must come in the top three at valley or meet a very tough At-Large standard. The following boys made state:

Who Made State? (Girls)

To make state one must come in the top three at valley or meet a very tough At-Large standard. The following girls made state:

Brushay Wandick (Bakersfield 12) made state in the 100, 200 and both relays. Frontier's Taylor Jackson (11) was the only other female track athlete to make state. Though the favorite in both hurdles, she only made it in the 300. In the field events Kern County had more success: Amanda Klinchuch (Liberty 12) made it the pole vault, Shanesha Epps (Golden Valley) in the long jump. Anna Jelmini (Shafter) and Alex Collatz (Stockdale) made it in throws and Lacie Rasley (Shafter) made it in the shot as well.