In the fall of 2006, I returned to the local high school cross country and track scene and immediately heard of a wunderkind from Foothill by the name of Chris Schwartz (12).

The stories I heard of him, I took with a grain of salt. Often I would be told of this or that athlete and the hype rarely matched the reality. Well Chris is the real deal and in my opinion has had the best high school career of any distance runner from Bakersfield.

Sure there have been athletes in the past who might have run a bit faster:
But Chris has had great times in both events and been extremely successful in cross country (state D1 champ in 2007). Plus he has been one of the top runners in the state since his sophomore year.

Another factor is that he is so much better than his peers. Most of the top times on the list happen more than 30 years ago! He is charting waters that have not been seen in decades and he is doing it alone. The runners in the 70s had each other to feed off of. Plus there was the seventies running boom and the international success of athletes like Jim Ryun, Prefontaine, Frank Shorter, Billy Rodgers and many more. Lastly, Chris still has a few more meets left to run in his high school career and hopefully a state title or two and some PRs too.

At Area, Chris ran for the win and the real race was for the last three valley qualifying slots. for the first couple laps there was a large pack lead by Alex Garcia (Ridgeview 11'). On the third lap Schwartz took the lead and the pack began to thin and stretch out.

Lap four saw Schwartz, Garcia and Kelly (Stockdale 9') forming a pack that was 20 or 30 yards in front of Ariey (Bakersfield 12') and Robby Baker (Ridgeview 11'). As per usual Schwartz made his move at the 1600 mark and left Garcia and Kelly. Baker lead Ariey in an attempt to join Garcia and Kelly.

By lap six, Schwartz had the race won and Kelly was gapping Garcia. Baker had left Ariey and it looked like Ariey's only hope was that Garcia would continue to fall of the pace. At the start of the 7th lap, Baker had caught the two in front of him and it looked like the final four had been decided.

With a lap to go Schwartz had a comfortable lead over Baker and the rest of the placings had been shuffled a bit. Kelly was third and was followed by Ariey and then Garcia. On the last lap Ariey caught Kelly to move in to third with a PR to boot.

Kelly is the 8th fastest 9th grader in the state and the second best on the valley. Perhaps Curtis Kelly will pick up where Schwartz left off.

The Tortoise and the Hare Redux

I hope one day the hare takes off and runs a great time for a win someday but so far it has not happen. Guzman has run some good times but the tortoise usually catches her in the end.

Of course Lynch (10) and Baker (Bakersfield 10') are not tortoises but they both used the same strategy recently to beat Guzman. Baker reeled her in at the SEYL meet and Lynch did the same thing at the Area meet.

The four who qualified for valley will get to run against Jordan Hasay on May 23rd at Buchanan High School.

Third Time is the Charm

Deja Two Hundred That Is

The 200 finish was very much like the 100 except Brown and Belt switched places. Wandick (sr) and Brown (sr) are both ranked in the top ten in the valley. Last year, Wandick ran the 200 at state. Interestingly, Watson got second overall despite being seeded in the slow heat.

Why Not Go Big!

Before the meet, I heard that Jerrid wanted to make a statement at the Area meet and he did in the 800. Usually, he lets others handle the pace making and then he goes in for the kill on the homestretch. But from the gun he took the lead and never looked back.

When he hit the 4oo, his time was 54 seconds and at the 500 it looked like the hunter might be the hunted this time. The Highland boys were in his slipstream and looked like they were ready to pounce.

At this point Schwartz was out of the race and I wondered if something was wrong with him because before the start he was nursing his knee and looked to be in pain. By the end of the race, Schwartz ended up jogging in and finished last with Solis of Ridgeview. Then he left the track immediately, which is unusual for the gregarious Chris. Later in the evening he looked good in his win in the 3200 and ran the anchor league of the 4 x 400 so who knows what was going on

In the final 300, Jerrid increased his lead on the Highland athletes and posted the fastest time in the valley this year. Colin Lewis of Highland also posted a season best to go along with his second in the 1600 earlier in the evening.

Two Firsts by Less Than a Second Combined

I have known of Sarah Baker since my own son's started grade school with her years ago. Whatever the sport, she excelled at it. I still remember her epic battles with Mr. Lawrence on the playing fields of Franklin Elementary. He was a young athletic teacher who I am sure helped develop Sarah's competitive fire. Combine that with her mom's distance running talent and physical trainer background and you have a terminator with a smile.

Though just a sophomore, Sarah has won a lot of titles already and most of them have come down to a sprint at the end. She has won two SEYL cross cross country individual titles in photo finishes and and lead her cross country team to the team title in 2007 and second in 2008.

In track, she has had to triple (1600/800/3200) at most dual meets to help the girl's squad remain undefeated in duals over the past two years. Her SEYL track record is almost perfect in the triple crown. She won all three events in 2009 and won the 800/1600 in 2008. She came in second in the 3200 that year but if the team had needed first place to win the team title, she would of probably pulled it off. The team has been SEYL champs both years too.

At the South Area meet she won the 1600 in 2008 and this year she won the 800 and 1600. With all these running accomplishments, she still finds the energy to play soccer almost year round too.

Also unlike many female distance athletes who burst on to the local scene their freshman year and then slow down as they get older, Sarah seems to be getting stronger and faster as she gets older. What is even crazier is that she thinks her eleven year old sister (Maggie) will be a better runner than her in the future.

In the 800, the field was reduced by two before it even began for uniform violations. This late in the year, one would hope this would not happen but two were dismissed as soon as they got up to the starting line for a lip ring and a nose ring. A terrible way to end one's season.

After 500 meters, Delarosa (jr), in all black, was looking strong and in control. She was followed by Baker, Lynch and McAtee (sr). At this point many would of picked Delarossa for the win or perhaps Lynch (soph) who looked very relaxed in third place and has has sub 60 flay 400 speed. But they would be wrong because halfway down the homestretch, Baker made her patented move and some how pulled out yet another photo finish with a 800 hundredths of a second margin of victory.

Hunt of Bakersfield and Jenning of Stockdale ran the exact same time but only one is moving on. Of course, Hunt will be busy with the 400 relay, 200 and 4 x 400. Both Sumlin and Alade are ranked in the top ten in the valley.

Please it is Twelve Foot!

Before the season began she was ranked in the top ten in the state and is number two in the valley now. She clears 11' 6 consistently and should make state. Next year she will be vaulting for Long Beach State on a full ride scholarship.

Stockdale had two underclassmen making the valley meet and at the SWYL frosh/soph meet, Giuliano went 10' and Hobin went 9'6. These marks would put them in the top ten in the valley.

Two Down, Two to Go 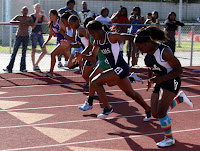 After anchoring her team to victory in the 400 relay, Wandick (sr) took the 100 too. She is ranked number two in the valley and will be accompanied by her two teammates at valley in the 100. Lei Belt's 12.49 vaults her into the top five with Watson in the valley. The Drillers are so deep that Belt is not even on the team's 400 relay.

Things are Heating Up ...

So it is your senior year and the last meet in front of the home crowd. Plus your former teammate, who you ran the 4 x 400 at state the past two seasons with, has the fastest time in the valley and is in the race.

So what do you do? Well if you are Mr. Affentranger, you throw down a season best performance and win that sucker and look forward to the valley meet for another rematch.

By the way, Marty also has the best long jump mark in the valley and his team made the 4 x 400 too. Isiah Purvis will be busy too being that he is number two in the valley in the 200 and on both ridgeview relays

Marty plans on continuing his education and track career at Cal Poly SLO in the fall.
Posted by Andy Noise Experience! at 11:25 AM No comments:

Erica Wilcox (jr) has owned the 400 locally and has been mainly racing the clock but next week at valley she will have her work cut out for her to make the top three and move on to the state meet.

There at least three girls under 58 in the valley and I am sure Wilcox will be joining them shortly.

Bakersfield came in 3rd and 4th but may not run the open 400 at valley and focus on making it to state in the 4 x 400 relay. Interestingly, the Driller's fastest 400 runner has never run an open 400 but is no stranger to Wilcox. Brushay Wandick (sr) owns the 200 but a heads up in the open 400 would be interesting.

At most meets, Wilcox and Wandick run the same leg of the 4 x 400, with Wilcox usually chasing Wandick. With Brushay off to CSUB in the fall, this much hoped for match up in the open 400 may never happen but I have heard that Wilcox is interested in competing for CSUB in the future. So maybe that match up will happen after all.
Posted by Andy Noise Experience! at 10:19 AM No comments: