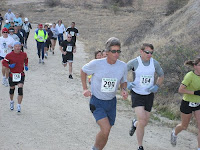 Besides being a good triathlete, Mike can take car of business in the run too. In second, was 59 year old Klaus who ran a very good time and I am sure he can not wait to turn 60. many of you know Klaus even if you do not. He is the really tan shirtless guys at almost every local race.

These things we know.

It was dark when the 17-year-old runner slipped into the path of an oncoming car Saturday night.

The bridge over Calloway Drive, where the speed limit is 55 mph, had no street lights. The moon wouldn't rise for another hour.

A fork in the 10k course along Bakersfield's Kern River bike path wasn't marked when the runner headed up the wrong path around 9:15 p.m.. The 17-year-old hadn't previously run that portion of the trail.

And he had headphones on.

The headphones, police say, were a contributing factor in the accident, which critically injured the teen. (He's now stable and recovering.)

On Thursday, the incident sparked heated discussion on the Web site of national magazine Runner's World, where Executive Editor Mark Remy received more than 100 responses to his blog post about headphones and safety based on the Bakersfield tale.

Runners and headphones enjoy a powerful and sometimes troublesome symbiosis.

Some runners need music for company, distraction and inspiration. Others want to hear footsteps and breathing -- and the world around them, with its beauties and dangers.

Michael Taylor, 54, president of the Bakersfield Track Club, said headphones are commonplace along with annoyances they create.

A runner trying to go around another often isn't heard. On the bike path, bells or shouts from approaching cyclists fall on music-deafened ears.

Running is "a world you need all of your senses in," Taylor said.

PHONES ON THE RUN

Still, the group allows headphones at the dozen or so events it holds around town annually. Some clubs ban them, he said, but that's not common practice.

Taylor himself currently doesn't use headphones, but his daughter just bought him an iPod and he looks forward to low-volume accompaniment.

Bakersfield runner Lisa Sorensen, 36, likes punk and dance music on her runs. She has playlists for common distances -- 5k, 10k, half-marathons and marathons -- but keeps volume low enough to hear shouts and whistles.

"It helps me stay focused and not hear myself breathing," Sorensen said. "Plus it keeps chatty runners from talking to me."

It happened without warning.

Casey Geiger, 19, was driving south on Calloway in his mother's Honda Accord Saturday night, headed to his home near Ming Avenue and Ashe Road.

As he crossed the bridge approaching the light at Stockdale Highway, he'd slowed to about 45.

"He darted in front of my car," Geiger said. "I didn't see him until I hit him."

He'd smoked pot that evening, about an hour or two before, Geiger said, but not very much. He doesn't feel it played a part in what happened. He wasn't talking, texting or fiddling with his car radio.

The accident was a shock, he said, still surreal and unbelievable when he woke up the next morning.

"I'm so sorry this happened. I feel bad for him," Geiger said.

After the impact, he made a U-turn at Stockdale to check on the runner.

Saturday's nighttime run was a fundraiser for the Bakersfield Police Department's K-9 unit.

Detective Mary DeGeare said the 17-year-old is from Qatar, an Arab emirate in the Persian Gulf, and was in Bakersfield visiting relatives.

The investigation isn't finished, DeGeare said, but some details are known.

The teen has run in the Bakersfield area previously, but hadn't been on that section of the bike path.

The teen wore reflective shoes but had on dark clothing.

The driver's speed, estimated at 45-55 mph, was reasonable for the conditions.

Investigators are still awaiting results of the driver's blood test and technical studies related to the scene.

The teen is doing better, but hasn't yet been able to talk to police, she said.