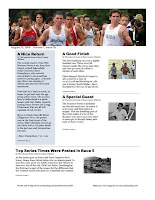 "The company, Printcasting, has a Web site on which anyone can put together a magazine featuring their own blog posts or articles and items from blogs and newspapers that have registered with the site. Advertisers can place ads in the publications. Readers can print a copy of the magazine or view it online or on a mobile device. Printcasting, which is backed by an $837,000 grant from the Knight Foundation’s program to find digital models for local news, hopes to attract new readers and advertisers to print publications. Dan Pacheco, the senior manager of digital products at The Bakersfield Californian newspaper, who founded the start-up, says reducing the costs of producing magazines is the way to bring them back" Complete article can be found on the New York Times website HERE.

I started using the service earlier this year (15 weeks ago) and think it is a great idea. I even made a webzine for every high school in town and made feeds for each too. Now others can use my feeds to create their own magazines as well. Most of school's are called "School Name" High Noise. For example, checkout Stockdale High Noise HERE.

Now I just started these without any idea of anyone would read them but I guess someone did because I sort of made the New York Times, "About 250 magazines have been created since Printcasting was introduced in March. A runner in Bakersfield blogs about high school track teams and then prints his posts to hand out free at meets." Once again, I made a national publication but did not get named directly.

A few years ago, Rolling Stone writers came to town and wrote an article on Ed Jagels and the Lords of Bakersfield. I got interviewed at Dagneys for an afternoon and ended up getting mentioned briefly. I was referred to as a record store owner who put out shirts and stickers with the "Lords of Bakersfield" and "Ed Jagels Hates Me Too" on them. They did not mention Andy Noise either.

But anyways, at least I sort of got mentioned. This week I got to have a meeting with "Dan Pacheco, the senior manager of digital products at The Bakersfield Californian newspaper, who founded the start-up." We talked about printing my AndyNoise.Com webzine and distributing it at the Wolf Pack Invite. So if you have content for me to publish or want to place an ad checkout Printcasting.