Shadow of the Giants 50k

This race has been going on for over 2 decades and so I thought I might as well run it since I have been ultra crazy lately. I did 40 miles on April 2nd on my Mr. Toads 12 Hour Challenge Course, then did the Leona Divide 50 miler on April 30th and the bishop 50 miler on May 21st. Though this race was the shortest, it was the hardest.

Because of our crazy weather, the course had to be changed several times because of snow and ended up taking out the run by the Giants. So this year weather has hurt scenic runs. At Big Sur the ocean ate up part of the course earlier this year. I also hear that a lot of the Western States course is under snow as well.

My day started at 3am when Tom and his wife came and picked me up for the ride to Fish Camp. We could of spent the night at the school dorms for $15 but I like sleeping in my own bed. The ride up went smoothly but the skies were grey and we knew it was going to rain, When we rolled into Fish Camp, a couple deer ran across Hwy 41. Funny it was the only wildlife I saw all day. Who says animals are dumb! It was cold and wet and they stayed out of the weather.

We got to the school around 6am and went to check in. As I walked up to the registration area, I saw my Bishop friend Ten and a number of other ladies take off and found out they were starting early. I was kind of bummed because I realized they were the people I was probably going to run with and now I was going to have a lonely day. Then I saw Baz (the RD) and he told me to get moving and I could start early too.

So I went to the car and threw on my gear and got started around 6:15am and immediately stared going up hill. Plus I got to climb over logs and go through snow too. I did not know where I was going but knew I was to follow the ribbons plus I could feel the mile high altitude. For the next 5 miles, I mainly went up hill and I was slow (15:30 pace). About two miles into the race, I got concerned that I missed a turn and retraced my steps for an extra half mile of running.


The course was marked but on the fire roads there were not a lot of ribbons and I second guessed myself. Most ultras rarely take the easy route and hit some single track but this race rarely wandered off the fire roads. As faster runners passed me, a number of them asked me if they were going the right way as well. In fact, the lead woman passed me and then ran back to me to make sure she did not go the wrong way.

Fortunately before the fast runners caught me I fell. I was just running down the pine needle laden fire road and tripped over the only rock on that part of the trail. I fell in super slow mo and did not get hurt at all. Later in the day, a runner came by who also fell and he hurt his ribs and ended up dropping out. Plus a runner ran into a limb and had a nasty cut on his head. So I got off easy with only my pride hurt.

Miles 6 to 10 were mainly downhill but I could not take advantage of it because of my size so my pace was in the 13 minute range. Plus my pacing was all over the place because I was shooting pictures and then tried to run a little bit with the faster runners. while this was fun, it lead to more fatigue then usual.

The course was mainly a 20 mile loop followed by and out back ten miles section. So the return to the start was over the same mountains that we had go over for the most part. But now even my fast pace was only 15 minute miles and a few were over 18 minute miles. By the time I got back to the start my pace was over 15 minutes a mile and it was raining pretty hard.

The cheering crowd was nice there but I knew I had ten miles to go and if I stopped at this aid station, I would want to quit like many did. so despite being low on sports drink, I head up the ugly 2 mile hill that was wet and rocky and my pace was barely under 20 minutes a mile. as i watched the faster runners coming down the hill, I knew I would be going slow when I got to return. After the long climb, we had to go down a fairly steep hill to the last aid station.

Along the way, I had a couple ladies to keep me company and it was more fun then the miserable conditions warranted. Sadly I only managed 15 minute miles down these hills but that was fast compared to what I would do on the last miles. On the return trip, I made okay time up the hill but got passed by at least 5 runners on the final mile long downhill where I only managed a 19:31 mile.

By the time I got to the finish it was really raining and my left knee was aching. So to sum up my day:

I never seemed to get moving and my pace ended up being slower than my Leona pace. I think the cold and rain slowed me down plus the course had a lot of downhill that I have trouble dealing with. Someone my size can not go downhill fast just like the semi trucks going down the Grapevine. Time and again I caught faster runners going uphill and then they smoked me going downhill.

When I finally got back to finish I was really glad to have some amazing chicken rice soup to try and get myself warm. Plus I won a hat and got to hear Baz MC his interesting awards ceremony. 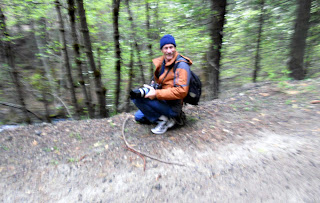 Posted by Andy Noise Experience! at 5:34 PM No comments: