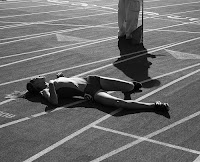 The photo to the left is one of my favorites from this year's valley meet. It is of Saylah Barserian right after she placed second in the 1600 to make the state meet and scored 8 points for her team that ended up being the valley champs.

Every year (since 2006), I have wanted to cover the state cross country and track meets but have always been turned down. 2009 was no different but at least I got a phone call this year.

Today, Ron Nocetti called me about the media credential policy. I appreciate him calling me on this hectic week for him and his coworkers. Unlike his predecessor, he is willing to explain CIF's decision and why the decision was made. He also acknowledges that it is a new era and perhaps the old media model needs some updating.

In the past, printed media and television ruled the landscape and the system was set up for them. They had the eyeballs so they deserved to be the eyes and ears of the public. Sure some little guy or gal had a local zine or something but few were ever going to see it. So the large media outlets got the limited access to the events.

But after my discussion with Ron, the CIF is going to look into their credential policies and see if changes need to be made. What I really liked to hear is that they plan on having their policy clearly defined and online for everyone to see. They are going to try and minimize the grey and make things more black and white.

The rule that CIF used this year to deny me a credential was:

Unauthorized selling of photographs taken at CIF State Regional and State Championship events is strictly prohibited. In accordance with CIF contractual agreements, at no time may photographs be sold to the general public, participating schools or families of student-athletes.

Of course, they are putting the cart in front of the horse because I don't have a credential so I could not violate their policy. I was not given a chance to agreed to not sell state meet photos either. They just went on my site and saw that I did sell prints for 42 cents and assumed I would sell the state ones too.

But if I had gotten a credential, it would be very simple to not sell the photos. I just click a button and they are not for sale. But I was not given this opportunity. I was assumed to be guilty and therefore denied a press pass.

The reason for this no selling of photos policy is because the CIF has a contract with MaxPreps to be the official photographer of the CIF. Now I can guarantee you that MaxPreps did not agree to this contract because of cross country and track. They did it for the major sports coverage and got stuck with the other sports. If you go to their website it does not even list our sports! They list lacrosse but not track or cross country.

But since they have the contract, they own the exclusive selling rights of any photo taken at state track meet. They do provide a service, by taking the awards photos and some action photos but it appears, that they do the bare minimum.

But because of the contract and the possibility that I might violate the contract, I am denied a media credential. Of course, we all know that some media credentialed photographers do sell their photos to the public. I doubt they willingly violated the policy and are merely doing it as a service to their consumers.

So the biggest meet of most athletes lives will go undocumented for the most part unless they win their event. MaxPreps is not shooting every race and every lap of every race on the track (I do). They are not trying to cover as many field events as they can either.

Most of the other credentialed media is not either. They are there to cover their local star and that is about it. They will shot the athlete finishing the race and that is about it. If they take more photos, they are not seeing the light of day for the most part. They can not sell them, or put more then a couple in print and putting them all online costs money too. So they will be deleted.

I have and would shoot every race and in the longer races, I try to shoot every lap. Plus I usually try to shoot every athlete in the race too. I crop the ones I think are good but I also upload all the shots I take. Sure many are awful, okay most are awful but you never know what that throw away shot might mean to the athlete or their family. Or it might be the only shot on record of a future champion.

But because I am not a real media outlet and that I might violate their policy, I am denied a credential.

Another consideration is that they have a limited number of credentials and with the meet at Buchanan, there are even fewer passes to hand out. Plus they do not have a policy to determine who deserves to be credentialed. One suggestion, I made was giving some Friday only passes. I doubt that many of the media outlets actually cover the Friday prelims.

The CIF does keep track that the passes were picked up but does not monitor their actual use. If an organization does pick up their pass, they won't be getting one in the future. So I bet they pick them up but I doubt they are all used.

The last barrier to me getting a credential is that I do not have enough original content. Since the start, this has been an issue with the CIF and in the beginning my site was just a bunch of links. But it takes time to track down those links and make them. Plus a lot of the results were on my site because I tracked them down relentlessly. i also shared the results with other sites.

After my first rejection, I did try to write more. I started writing meet previews and recaps and believe, I am on my way to more original content. I will be the first to admit, that I would not have started this process if CIF had not said it was a shortcoming of my site. I am not a huge fan of writing and it is not easy for someone who has a B.A. in Biology to do.

Plus I have an issue with this content issue. Sure a large newspaper has a lot of original content but how much of it is track or cross country related. If you measure both of us by that standard, I win hands down.

So with the meet a few days away, I am on the outside looking in. I do appreciate Ron's candor and his promise to reevaluate their policies and possibly make changes. I wish him and his staff a smoothly run state meet and hope to some day get credentialed.

We received your application for a credential for the CIF State Track and Field Championships. After reviewing the application and visiting your website, we are unable to grant your request at this time. It appears that you sell photos on your website and we have an exclusive contract with MaxPreps as the official photographer of the CIF
MY RESPONSE:

Every year, there is a new reason. In 2007, I was told by your office that all my site was a bunch of links to information on other sites. That it was nice that I did that but I needed original content. So I wrote meet previews and meet recaps and more for the 2007 cross country season and the 2008 track season. I was again denied in 2008 (for track) because I was deemed to not be a media outlet and though my photos were nice they were on a "flickr" account.

So I continued to write and post photos of the 2008 cross country season (got rejection for a pass for the state cross country meet) and this season for track, I even wrote more. Plus I bought a better camera and opened up a pro Smug Mug account. I have even taken the time to label most of my photos on there too. Once again, I sent off a credential request and have been denied again.

All I want to do is cover my Central Section athletes that I have been covering for the past three years. I do not want to cover just the stars (though making it to state is a huge achievement) like my local paper will do. The Bakersfield Californian is a fine paper but they will cover Matt Darr, Chris Schwartz and Anna Jelmini and post a couple photos and a brief story on the meet and be done with it. I want to cover all my athletes that made it to state, like I have done at this link:

CIF State Track & Field Championships: June 5 & 6
and like I did at the this meet:

"It appears that you sell photos on your website and we have an exclusive contract with MaxPreps as the official photographer of the CIF". I understand contracts etc so what if I only post my photos on flickr were they are free.

Or on Smug Mug and I make them free.

Furthmore, Maxpreps doesn't seem to care very much for track, if one goes to their main page:

They don't even list track & field as a sport on the site. The only evidence that they cover track is a couple photos on the bottom of the page. Lastly, even my own local paper sells their photos and I bet most media outlets that get media credentials do.

So why do they get a credential and I don't?
Posted by Andy Noise Experience! at 6:04 AM No comments: