Another Day Yet Another Sweetheart in a Car! 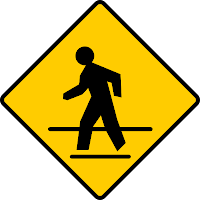 As most of you know, I Hate Cars! Even before I became an ultra walker, I did not like them. I did not even buy a car until I had been living in the Car Capitol Hell of the world Los Angelses for a year. I bought a VW Golf and hated it from the minute I got it and sold it when I came back to Bakersfield to open up my record store. I lived and worked downtown for a number of years without a car.

Over the years, I have avoided driving as much as possible and even my kids walked or took the bus to school. This school year, my 7th grader and I walk to and from school everyday. It is a 3 mile round trip and I do it twice a day and without fail there is a driver or two who choose to ignore the crosswalk laws. Now almost everybody drives through the crosswalk behind us before we are safely across the road but there are always a few who can not even wait to do that.

Today's sweetheart was a lady on her cellphone (against the law btw plus she was smoking with the other hand) and she sees we are coming and the traffic is way to busy at 24th and F but she still inches her car into the crosswalk and sits there hoping to turn right. Of course she is blocking our legal pathway but doe she care? Of course not. But at least I had the pleasure to tell her off and wish her a great Valentine's Day.

Honestly people can we get off the phone and obey traffic laws! I think I should start video taping these people and put them on youtube. But in the end, we made it to school and then the chugs and I headed off through Westchester and got to spend some off leash time in the river bed for awhile. It looks like the water is coming back so we could not cross the river and it was pretty muddy too.

Then we got home and I did a Nike Training Camp workout with my chugs in the backyard. They think it is playtime when I am on my mat doing drills and they make it fun. 18 months ago I started doing boot camp / circuit training and I know it has helped my running. Besides being stronger overall, it has helped me with my agility. This agility helps me with my trail running a lot and has helped keep me injury-free as well.
Posted by Andy Noise Experience! at 10:26 AM No comments:

Email ThisBlogThis!Share to TwitterShare to FacebookShare to Pinterest
Labels: crosswalks 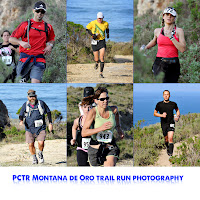 What a fun day! Fun, Sun, Trails, Friends and some Hills thrown in to keep it real. This was the second Pacific Coast Trail Run that the Bakersfield Distance Project attended and I am sure we will be running many more. This one started like the first (Santa Monica Mountains) with an early morning meet up at Bagels and Blenderz at 5am to form our carpool and convoy.

Our convoy consisted of Lisa driving her husband's SUV with Rey and I on board and Denni had Norma and Cindy on board. Then we headed of to the infamous Highway 46 with a quick stop in Lost Hills. The drive was uneventful except for the 45 mph signs on some of 46 which made the going slow. Despite the speed restrictions, we got to the race around 7:30am and it was a beautiful sunny day.

One thing that was funky at this race is the earlier you showed up, the further away you had to park. So we parked and when everyone got out of the car, they were all cold because of a very cold wind that was blowing. Even walking down the hill to the registration area and back to the cars did not warm us up.
But before we left the cars, I convinced everyone that it would get warmer and they needed to remove a couple layers. When we got back to the start, we saw Stephen who was primed and ready to go. This was his first official trail run so I do not think he really knew what he was getting into. However this run would be good preparation for a hoped for first running of the Dipsea this year.
Then we finally got started and headed up the road to the trails that ran along the bluffs. Just a little ways up the road I saw Denni with yet another watch issue. She forgot to locate her satellites before the start of the race and so she stopped for a bit and acquired them.

Interestingly at both PCTR events that I have run, we have bottle necked in the first mile and had to wait to get on the trail.But after we crossed the bridge, the field started to thin out and I started my 1/4 pattern. The first couple miles were along the bluffs with spectacular views and everyone was moving along pretty quick. I tried hard to hold back because to my left I could see Valencia Peak and knew that was going to be quite a climb. 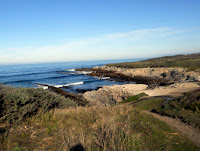 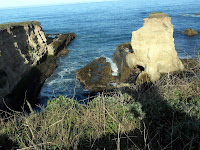 In these early miles, Judy from Bakersfield caught up with me and we ran along the bluffs together.
But the fast times were soon to be over because we turned left and headed east to the hills. The first hills were good for me and I started catching some of the over eager runners in front of me. As usual with trail runs, we climbed to the top of a hill and then promptly went downhill before we started the big climb of the day up Valencia Peak.
I enjoyed the climb to the top of Valencia Peak but it was slow going. The final mile took me over 22 minutes to ascend but some of this was because of having to pause and let the faster runners go down the hill as I was trying to go up. Plus the footing was rocky and I knew I had 11 more miles to go. As I went up, I got to see most of my BDPers and everyone seems to be having fun.

When I got to the top, I took a couple quick shots and then headed back down the trail where I knew I could make up some time on the not so sure footed. Over the next two miles. we dropped over 1000 feet and at times the trail got tricky especially where it was wet. While I was going down to the aid station, Norma caught me and at first I thought I was on the wrong trail because she was doing the 12k.
After a steady descent, I finally made it back to the starting point which was also the aid station. Because I had my Nathan on, I did not need to stop and headed out for the second loop of the course. As I went by the aid station , I was surprised that I had caught Cindy but she had stopped to refil her bottle and remove her jacket.

We chatted for a bit but as soon as we got on the fire road, she was gone from sight. She ended up putting 13 minutes on me in the last 9 plus miles! A lot of that time was made on the fire road, which I did not enjoy. it was warm and slightly uphill and seemed to go on forever. The only thing that made it bearable was a young gal tried her hardest to pass me on it. She should of saved herself for Hazard peak because I never saw her after we got on it.
Though the fire road was dull, the next part of the race was even harder than Valencia Peak because it went on and on. At least VP was just one climb and you could see where you were going. Hazard Peak had several false summits (three) and seemed to just go up and up. Plus we were still heading away from the finish and now the mountain bikers started showing up.

It never seemed that the bikes were going uphill but I seemed to catch everyone going downhill and they were annoying. They would just bomb along the trail and then say "Thanks" as they whizzed by. It was not like they gave you an option of getting out of the way so the thanks seemed very insincere. I use to be a cyclists and their behavior and the behavior of Bakersfield cyclist on the bike path continues to appall me. Why they have to be so rude is beyond me.
After all that climbing, it was time for some downhill and I had two wily veterans chase me most of the way to the finish. At one point, I thought the two older guys would catch me bought when we hit the pretty forest, I got a second wind and put some time on them.

After I left the forest, I realized the course was not a 25k and ended up being a 27k. One could see the finish and it looked a ways off but it it was at least downhill. Here is where I caught Chelsey who was walking with another runner and at first, I thought they were done with the race but then I realized they had just ran out of gas.

After the race, Chelsey said she underestimated the difficulty of the course and ran out of water. That is why I say that trail running is chess and road racing is checkers. Chelsey was one of many victims of the course that day. Stephen had a great first half but then ran out of gas around mile 10 where Rey caught him and put ten minutes on him by the end.
I ended up running the 16.67 miles at 14:55 pace and had a great time out there. The course was challenging and seemed harder then the Santa Monica Mountains course. I look forward to running it again and someday I might try the 50k.

Posted by Andy Noise Experience! at 6:45 AM No comments: