I started this on Tumblr but it doesn't work well with a long post so I will continue it here. I left off with Tom and I deciding what to wear with the storm brewing to the north of us. O decided to wear my Nike Coach jackey but left my arm warmers in the car which in hindsight was a mistake. Then Tom, his daughter and I headed to find our team mates.
We found out via text that all of our friends were hanging out behind home plate so we headed there but first I had to make a pit stop which ended being a long wait. The stadium has a lot of urinals but few stalls so the wait was super long but finally I was able to find my group who were freezing and decided to find a warm place to hangout for the next hour or so. but finally it was time to head to the start and as we walked over there it started to drizzle.
When we got to the start, I knew we were in for a wet one. The crowds were huge and we could not even get on the road for the start and had to wait to get through the small opening in the gate. By now it was starting to rain more and we started eying all the discarded clothes for rain gear.

My partner in crime for the day was Lyndie who also wanted to break 5 hours and planned on a four minute run / one minute walk strategy.
It took us over 10 minutes to cross the starting line and then we off in pursuit of our sub five hour marathon. Last year the race went completely around the stadium but this year we head downhill to Chinatown.
In these first miles, we ran a little more than we planned but when you are going downhill, you need to take advantage of gravity. Some of the sites we saw in the first five miles were Olivera street, city hall, Little Toyko and the Dorthy Chandler Music Center.
So far the pace felt easy and we were not going out fast but I thought I needed to pick it up a bit. Before Surf City my goal was to break five hours at LA but after I paced Diana to a 5:06, I started to thing I could maybe run sub eleven minute miles the whole way and get a sub 4:50 time. Then I ran the BTC Fun Run Five miler and ran sub nines the whole way and then I really started to think even faster.

My 5 miler predicted a sub 4:20 marathon but I knew that was completely unrealistic but sub 4:40 might be doable. In hindsight, I wish I had not run such a great 5 miler the week before LA because it almost cost me my sub five hour run. So even though I knew I had a sub five in the bag if I took it easy, I figured I would go for broke and maybe  bust a really great time.

So I decided to push the pace a bit and see what happen. Unfortunately this meant leaving Lyndie who was taking a more conservative approach to her race.
These miles felt good but i was pushing it a bit and at times it started rain really hard. Though the rain did not bother my feet, I know my shoes and clothing were adding pounds to my already large size. I went into the race at around 245 but I may have been a little heavier. As I said earlier, I had felt ill earlier in the week and went off my low  carb diet a little sooner that I wanted too. But when you feel awful, a low carb diet can make you feel worse because you have zero energy.

So I knew I was heavy and did not want to get on the scale and be disheartened more. When I got how from the race I was 244 btw. From mile 6 to 10, we past Echo Park Lake and Barnsdall Park. This part of the course was kind of dull and at times it was really raining hard.
The above miles are very scenic in that we pass the Capitol Records Tower, Grauman's Chinese Theatre, the Hollywood sign and the Whiskey A Go Go.But I started to slow down a bit too.Often i seem to fade around the half way point and then I am able to recover but I think the rain was taking it's toll. The main issue  was the weight of my soaked clothes and shoes which weighed me down and changed my stride as well.

The rain also made my walk/run strategy harder to maintain in that it one cooled down to much on the walk and starting back up was more difficult as well. So I ran more than I wanted and was not running efficiently because of the extra weight and the wet roads.  Mile 15 to the West Hollywood area was particular hard do to the footing. There was a sheen of water cascading down this steep hill and I saw a few fall going down. 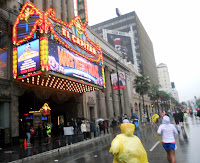 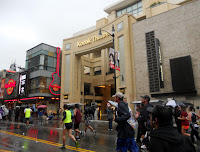 When we got to West Hollywood Wes passed me like I was standing still. This was his and Monica's first marathon and it was going to be a memorable one.
No sooner did Wes (4:55:37) leave me that his girlfriend Monica (5:00:54) caught me. I was able to run with her for a few miles but she was not taking any walking breaks so before we got to the 405, I had to let her go. In the end, I finished between them (4:56:39).
After Monica left me, I just looked for any pace group I could find that was moving faster then myself. The first group I found would run for what seemed to be 6 or 7 minutes and then they would come to a screeching halt almost. They even completely stopped at times which I think is an awful idea. Even if you are waiting for a friend, you should keep moving forward and just slow your pace. To completely stop is just plain stupid.

By know it was raining no stop and often the road was flooded and sometimes we had to make detours. Going through the Veteran's Administration area is always hard because it is around the 20 mile mark and there is a climb there.
At long last I got on San Vincente and knew the end was near. I like running her because the road is good and it is downhill. Plus there is always a good crowd cheering the runners on. This where a large group of sub five hour marathoners caught me. Their pacer was pretty good so I just joined their group of 20 plus and hung on. Like most pace groups, they run too fast and walk too slow but I was able to stay with them.

On one of our walk breaks, someone came up on me fats and gave me a hug. It was Lyndi (4:52ish, her number did not work) who I had not seen since mile 5. I believe were were 2 or 3 miles from the finish. Now in marathons, rarely do I get passed in the final miles and if I do, I can run with them for awhile. Lyndi just left me instantly and had a huge smile on her face.
As you can see, the  wheels really came off for miles 22 and 23. My thighs and hips were very sore and running quickly was becoming difficult. I believe the leg fatigue came from the weather and the lack of running in my training. I do 100 plus mile weeks but rarely run more than ten to 20 miles for the whole week. This works for a pace slower than 10 minute miles but when you have to go faster, you need more specificity in your training.

So in the future, I hope to up the % of miles I run each week. Another thing I have to learn to deal with is my perception of time. In the past, I was averaging 13 minute miles so in the last miles of a race, I always had a cushion (at least mentally) but when you goal pace is 11 minute miles, there is very little cushion. I distinctly remember hitting mile 23 with a little over 40 minutes to go for a sub 5 and thinking that is a little over 13 minute pace. In the past that was fast for me and so I kind of freaked out a bit.

The old me had to push to run that pace and I feared if I slowed at all, I would miss the sub five mark. but i was able to bring pace back to the low elevens and finish with my goal of breaking five hours.

too be continued...
Posted by Andy Noise Experience! at 9:11 PM