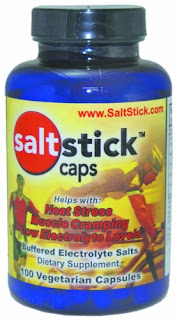 I have been running since 1979 and back then we didn't know about hydration or nutrition. Sure a race might have water on the course but most of us thought it was a sign of weakness to drink for the most part. I use to do 20 mile training runs and not drink a drop of water. Now I carry a bottle when I walk my son to school (a 3 mile walk).

Of course back then all sports behaved like this. I played football for a few years and I remember not being allowed to drink during pre-season training. So since we were not even drinking water, we definitely did not know anything about electrolyte replacement. Sure Gatorade came out back then but I just remember it being sugary with a little salt thrown in. Besides it was never mixed right and I do not think it helped much anyways.

Over the past years, I have improved my hydration and nutrition but I just recently found Saltstick. At most races I just hope to get what I need from the snacks at the aid station and even though I have not had any stomach or cramping issues, I knew I should be a little more vigilant on my electrolytes.

So at the Ray Miller 50 Miler, I started taking the Saltstick electrolyte capsules. They had a bowl of them at each aid station and I would grab a couple and tried to take one once an hour or so. they are real easy to swallow on the run btw.

As I said before, I have not had issues during the race but i think taking these throughout the race, really helped with my recovery. The week after Ray Miller, I was able to resume my 100 mile weeks and felt good. I also think Saltstick will help me at the San Diego 100 and the Angeles Crest 100 miler especially since it should be much warmer at these races.


Posted by Andy Noise Experience! at 8:42 PM No comments:

The Start of Another Season

5 years ago I returned to the local track and field scene with the EB Relays. Back then it was an old school meet and it still is. They never promote the meet despite it being the local season opener and complete results are never made public either.

Recently my power walkers and I have been training on the track and stairs and the track is in terrible shape. We could not believe how many cracks there are on the track and how hard the surface is compared to most other tracks in the valley.

In the past, I went to this meet as a coach and reporter but my camera is broke and I have Bakersfield Distance Projecters to run with in the morning. So I will not be attending this meet this year. I will be running a 20 miler in preparation for the LA marathon.

The meet added a 4 x 800 a few years ago and it is always a fun race to watch. In the past there has also been a 1600 and 3200 race which should be an early season showcase for Stockdale's Cameron Miller and Blake Haney who both qualified for the state meet last year.


About a year ago, I ran a Pacific Coast Trail Run and saw my first Hoka OneOnes. I thought they looked like moon boots and thought they were very odd. I had not run an ultra yet but I had already experienced foot pain in marathons and was looking for relief. Later in the year, I ran my first 50 miler (Leona Divide) and later on ran the Bishop 50 Miler. In both races my feet took a beating but I survived.

After climbing Whitney twice in ten days, I decided to try a hundred miler and choose the 100 Mile Endurance Challenge. It was an urban ultra from Corona to Santa Monica so I would not have to deal with altitude or monster climbs and descents. But I was facing a lot of pavement and sidewalk and I was not looking forward to the foot pain.

When I got to the starting line of my first hundred, it seemed like half the field was wearing Hoka One Ones and I wished I was even though I had never worn a pair. Well I made it 60 miles or so before my feet started killing me and I finished in 28:22 despite my foot pain.

Now with two hundreds coming up this summer (San Diego & Angeles Crest), I decided to buy a pair. Besides saving my feet, I have heard they help with descending and that is where I lose a lot of time in races. In fact, I missed the 28 mile cut off at the Ray Miller 50 Miler (I ended up doing  Miler) a because I was so slow on the steep descents.

Since I am not near any store who carries them, I decided to buy them from Zombie Runner who got them to me in two days (Free shipping btw!). Plus I saved 10% by using the Badwater code.

My first impression when I put them on was they ran true to size. I have been wearing tens forever (all brands) and they fit like most of the shoes I have owned. Now standing in them was odd because they have a lot of cushion. My sons thought I looked funny in them and I felt taller too.

Since I had some time, I went for a 40 minute walk / run in them. Walking felt very weird and slow too but running felt great. They seemed to really help me keep the Chi Running form that has helped me stay injury free over the years. Since I only ran on the bike path, I did not get to try them on some hills but this first test run was aces. Of course tomorrow's 20 miler will be a better test.
Posted by Andy Noise Experience! at 6:14 PM 1 comment: