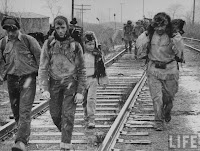 This is the first year for this event that was inspired by the 1963 50-Mile Hike Phenomenon and the Comrades marathon. For years now, I have wanted to do a 50 miler but have not mainly because I knew I could not make the time limits at most of the races. Most have a 13 hour time limit and the courses are hard. So the chance of a 6 hour marathon wogger of finishing were slim to none.

So on Sunday (09.26.10) I will be leaving Bakersfield High for my 50 plus mile journey to Tehachapi High. According to Google Maps, the distance will be 51.4 miles. In accordance with the JFK challenge, I hope to be finish in under 20 hours. Along the way, I plan to tweet on my progress and if you would like to join me for a few miles, please do.

Below are so links to some very interesting coverage of past events. If you miss this year's Challenge, next year I plan to do the downhill version from Tehachapi High School to Bakersfield High School.

2010 Facebook HERE.
JFK 50 Miler Website HERE.
Time Magazine from February 1963 HERE.
U.S News & World Report from February 1963 HERE.
Cool Old School Photos of the first 50 Milers HERE.
The 50-Mile Hike Phenomenon (Full Story HERE.)
A Look Back at the New Frontier of Fitness
In 1963, during the end of the Kennedy administration, a strange fad quickly grabbed the nation's attention. Based partly on a genuine concern for the public's fitness and partly on a dare, the nation briefly took to the streets in record numbers. Most walked like they never had before and would never do again.

In the tradition of the Comrades Marathon this year will be the first Bakersfield Distance Project Challenge. Like the world famous Comrades Marathon, this challenge will run in different directions each year and will be over 50 miles in length.

This year will be the uphill version from Bakersfield High to Tehachapi High.

In the tradition of the JFK 50 Miler there is a 20 hour time limit.

Mile was first held in the spring of 1963. It was one of numerous such 50 mile events held around the country as part of President John F. Kennedy's push to bring the country back to physical fitness.

When Kennedy was assassinated in November of 1963, most of these events were never held again. The JFK 50 Mile in Washington County, MD is the only original JFK 50 Mile Challenge event to be held every year since

In 1963, the initial inspiration behind the event came from then President John F. Kennedy challenging his military officers to meet the requirements that Teddy Roosevelt had set for his own military officers at the dawn of the 20th Century. That Roosevelt requirement was for all military officers to be able to cover 50 miles on foot in 20 hours to maintain their commissions. When word got out about the "Kennedy Challenge", non-commissioned military personnel also wanted to take the test themselves as did certain robust members of the civilian population.
Posted by Andy Noise Experience! at 1:07 AM